On the search for inspirational women making their mark on the cycling world, we spoke to Juliet Elliott. Juliet is one of our original Sheroes at Strongher. She’s a professional bike rider, writer and keen gardener too! Originally starting sporting life as a snowboarder, Juliet tells us what is about bikes that make her tick, training tips for race ready cyclists and her up-coming coaching for girls keen to get sharpen their skills on two wheels.

You’re a very accomplished sportswoman with a professional background as a snowboarder – what was it that changed your sporting direction and hooked you into cycling?
Quitting snowboarding and starting cycling wasn’t really a conscious decision; it was more accidental really. I came back to the UK after a snowboarding season and during the downtime I ended up joining a band, which then took up more and more of my time. We ended up going on tour to Germany and traveling a lot. In the end, I missing the snowboard season and it made me realised that actually my heart wasn’t in it anymore. I told my sponsors and sacked it off, then headed back to London to play in a band and do something else for a bit. I started riding as it’s the easiest way to get around London - it’s a pain in the bum to get around any other way!

Racing only began last year and that was just because I saw other women doing it and I thought, “Wow that looks fun, I really want to do that.” Last year was the first time I entered more than one race and actually committed to training to get stronger and faster. Before that I was just playing around, trying the odd race – mostly random races with no set focus.

Do you find that it’s helped you in your riding? Do you ever get back on a snowboard?
As crazy as it sounds, I didn’t spot the connection between snowboarding and mountain biking at first – but it’s the same as freeriding on a board – when you’re making your way down the mountain, picking a line and playing around on little jumps – they are so similar. When I first tired mountain biking, I was just slogging around in foot-deep mud at less than walking pace and didn’t really like it much – but then I tired rolling down a hill and playing around – that’s when I knew I loved it. I thought, “Oh this is why people love mountain biking!”

Getting back on a snowboard – well it’s something my husband and I would love to do, but we’re so busy – there’s not enough time and it’s also expensive. I do spend time in the gym and I’ve just started swimming but time is the issue really. I ‘d love to do more stuff like running and yoga too!

What’s the best part of the job that you do now?
The best part is the cycling of course! I am writer as well – it’s not that I dislike it but that part of the job means you’re sat on your bum! The best bit is being out on the bike and as I’m supported by several brands, I’m working with them a lot on things like catalogue shoots and videos. They also support my racing so those are the highlights!

Journalism came around really after my experience writing for a record label, which led on to PR work with Charge Bikes, writing their press releases. I started my own blog too and both just ended up merging into one.

You’ve been nominated by BikeBiz as one of cycling most influential women – what’s been the most rewarding memory for you since you got involved in supporting women into cycling?
Hmm, I don’t know yet! The most rewarding thing is yet to come I think. I’ve only just recently started working as a coach and a mountain bike guide with British Cycling. I’m also joining up with their women’s mentoring programme so I think there’s lots of rewarding moments to come in the future and I’m really looking forward to that.

As a freelancer within the cycling industry, your lifestyle allows you a lot of time on two wheels – but if you had to pick just one cycling discipline – what would you choose and why?
This depends on the location really! If I were next to a velodrome it’d be track cycling, if I were in Whistler it’d have to be mountain biking! Cycling touring was one of the best experiences I’ve had. My husband and I went to Japan on a cycle tour for our honeymoon and that was the best trip ever – we’d love to go back. Norway is on the list and I love the ideal of doing more of that. My strengths are more in power and sprinting when it comes to racing, so touring is more about enjoying the journey.

Catriona is an avid mountain biker from the UK, favouring endurance events. She has competed in various 24 hour, marathon and stage mountain bike races around the world including the Joberg2c, Epic Israel and the Strathpuffer. Currently working as freelance marketing consultant, mountain bike guide and serial adventurer, Catriona is happiest riding her bike, drinking coffee and planning her next trip! 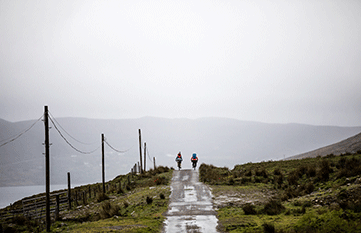 In May of this year, myself and Naomi Freireich set off on an adventure to a remote part of Scotland's west coast. Having raced t...

As I stood pensively at the Heathrow flight gate, suddenly it dawned on me. Today was Friday the 13th; a day famed for superstition and t...

Lying in bed, I was close to sleep when suddenly the room lit up; a bright, white flash followed by a brooding growl of thunder. Alone in...