12 reasons why every woman should take up road cycling

I know that’s a bit of a bold headline, but I believe that every woman should take up road cycling, and to prove it I’ve come up with 12 reasons. I’ve borrowed these from an article I found in Bike Radar that listed 30 reasons. Here are my favourites in no particular order:

Scientists at Stanford University have found that cycling regularly can protect your skin against the harmful effects of UV radiation and reduce the signs of ageing.

Researchers from the University of Illinois found that a ﬁve percent improvement in cardio-respiratory ﬁtness from cycling led to an improvement of up to 15 percent in mental tests. That’s because cycling helps build new brain cells in the hippocampus — the region responsible for memory, which deteriorates from the age of 30.

King’s College London compared over 2,400 identical twins and found those who did the equivalent of just three 45-minute rides a week were nine years ‘biologically younger’ even after discounting other inﬂuences, such as body mass index (BMI) and smoking.

Being more physically active improves your vascular health, which has the knock-on effect of boosting your sex drive, according to health experts in the US. One study from Cornell University also concluded that male athletes have the sexual prowess of men two to ﬁve years younger, with physically ﬁt females delaying the menopause by a similar amount of time.

According to research from Michigan University in the US, mums-to-be who regularly exercise during pregnancy have an easier, less complicated labour, recover faster and enjoy better overall mood throughout the nine months. Your baby has a 50 percent lower chance of becoming obese and enjoys better in-utero neurodevelopment.

6. Cycle away from the big C

There’s plenty of evidence that any exercise is useful in warding off cancer, but some studies have shown that cycling is speciﬁcally good for keeping your cells in working order.

One long-term study carried out by Finnish researchers found that men who exercised at a moderate level for at least 30 minutes a day were half as likely to develop cancer as those who didn’t. Other studies have found that women who cycle frequently reduce their risk of breast cancer by 34 percent.

Upping your salt intake is seldom your doctor’s advice, but in the few days leading up to a big ride, that’s exactly what you should do. This gives you the perfect excuse to munch on chips and other salty foods you might normally avoid. The sodium in them helps protect your body against hyponatraemia, a condition caused by drinking too much water without enough sodium that can lead to disorientation, illness and worse.

8. Get fit without trying too hard

According to the National Forum for Coronary Heart Disease Foundation in the US, regular cyclists enjoy a ﬁtness level equal to that of a person who’s 10 years younger.

I often tell people that I’m addicted to cycling, but they all agree that it’s not a bad addiction to develop. The result? I’m a happier, healthier person getting the kind of ﬁx that boosts the good things in life.

Once a thing of myth, the infamous ‘runner’s high’ has been proven beyond doubt by German scientists. Yet despite the name, this high is applicable to all endurance athletes.

University of Bonn neurologists visualised endorphins in the brains of 10 volunteers before and after a two-hour cardio session using a technique called positive emission tomography (PET). Comparing the pre- and post-run scans, they found evidence of more opiate binding of the happy hormone in the frontal and limbic regions of the brain — areas known to be involved in emotional processing and dealing with stress.

The social side of riding could be doing you as much good as the actual exercise and health benefits. University of California researchers found socialising releases the hormone oxytocin, which buffers the ‘ﬁght or ﬂight’ response.

Another nine-year study from Harvard Medical School found those with the most friends cut the risk of an early death by more than 60 percent, reducing blood pressure and strengthening their immune system.

12. Spend quality time with your partner

It doesn’t matter if your paces aren’t perfectly matched, just slow down and enjoy each other’s company. My partner and I ride at very different paces but we enjoy the occasional ride together, and  we enjoy having the ‘addiction’ and sharing all aspects of it.

And it makes sense: exercise helps release feel-good hormones, so after a ride you’ll have a warm feeling towards each other.

Nicola started cycling in 2008 to take part in a charity bike riding event. She loves cycling and it has changed her life. She wants to encourage other women to become obsessed as she is. To inspire other women she writes a cycling blog called Women Who Cycle. Next to that he works in the cycling industry in her home town of Sydney, Australia.. 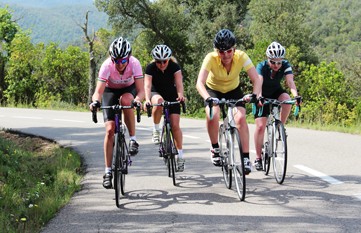 If you take up road riding in your 30s or 40s as many of us do, one area you need to focus on if you want to advance, is improving your r...

I’ve been riding a road bike regularly for about seven and a half years, and I’m realistic enough to know that I’m defi...

Cornering is one of those fundamental skills you really need to perfect if you’re going to be a good bike rider. I wouldn’t c...